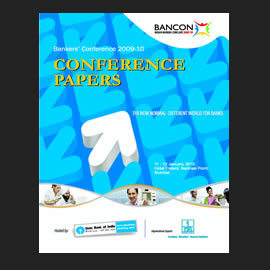 Bank Economists Conference (BECON) in India was started in late 1970’s and was held every year till 2003. A compendium of papers presented during the Conference was being published annually. In 2004, BECON was expanded in scope and was renamed as Bankers’ Conference (BanCon). It was hosted by Punjab National Bank and IBA in Delhi and was inaugurated by The President of India, A P J Abdul Kalam. In BanCon, the presentation of papers was replaced with panel discussions and special addresses by banking experts, but the practice of inviting papers on the conference theme, and their publication in a compendium continued.

Finsight Media has been retained for custom publishing of this compendium since 2007. Leading Indian banks such as Bank of Baroda, State Bank of India, Central Bank of India, Indian Overseas Bank, Bank of Maharashtra and Bank of India have utilised our services. We provided assistance in selection of the papers received, edited and proofread them, designed the template and cover page and published the (200-250 pages) compendium every year in a month’s time.